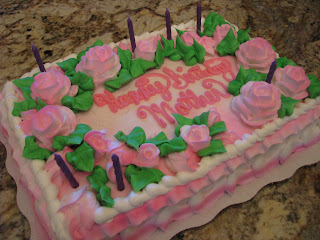 Just this past Friday we celebrated a birthday for my mother. I would only say how old she is if accompanied by a current photo as she is so lovely and sassy. However, this is about the past.


My father always gave everyone a name. It was like code and usually funny. Although my mother's name is Betty he called her Mildred. Once I arrived, she became Mama Robin. Mother called him Curly but he called himself Poppa Robin and signed cards to me as such until the very last one he inked before he died 10 years ago. I would hear him talk to her in a soothing tone "Mama Robin, what time does that baby sister need to get to Skate-O-Rama?" So dear. He baby talked to me the very last day I saw him. Oh, to always be somebody's baby...

Mother was tougher than that, stead-fast in loyalty, but she always held back a little. Probably having grown up with 6 sisters in a two bedroom house would do that to a gal. Good lord. So hard to imagine. All those babies were born at home, including one that died as a little girl. Seven babies born at home in the very same bed they were conceived. I am thinking I would remember one act upon starting the other and deny access but who knows what Mary Lou was thinking. Probably hardly allowed to have a mind of her own. And she must have been exhausted in every possible way.


On her birthday, we were thinking about the day mother arrived at twelve and a half pounds. Dear God. Mother said when people came over to see the new baby they must have been so disappointed since she was so big. I bet it was the new mother that was so disappointed she was so big. She was always complaining that after the birth of my mother, she was never the same. Twelve and a half pounds? I bet.

The poor thing. I never met my maternal grandmother. I was a toddler at the funeral. I still have my mama robin but what of mama's mama? With so few possessions and all those daughters, mother has precious little of her mother's things. Only memories to spread around. 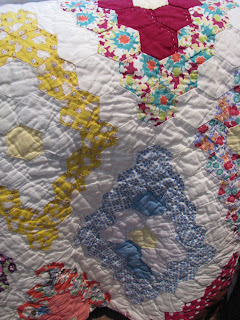 What we do have is a Grandmother's Garden quilt made from flower sacks. Mary Lou gave each of her six daughters a quilt. My mother's quilt was on my bed when I was little. That begat my love for fabric, texture, pattern. I used to stare into it like it was the night sky. Every fabric told me a little story about itself. I tried desperately to locate every occurrence of a print and what was next to it, cataloguing all the color combinations. So that is how the connections get made. When that quilt is held, it tunnels through the earth forming a passageway to a room where Mary Lou sits, needle and thimble, thread and time, stitch after stitch locking her life to mine.

These things we produce, not our children or our own lives but these possessions we make with our hands are so important. Not that we need to be remembered so much or to have value, but to give a much needed past to our children and children's children whom we may never know. These things we create tell the story of some of the time we have spent here. It marks some hours and days or more of our lives. Laundry doesn't do that, dinners we cook don't do that, the yard, save for the trees we plant, cannot give evidence of our time. When we use our hands we capture precious time and cast it into the future. I will keep doing laundry and cooking dinner and celebrating birthdays, mine and others. I will also keep creating, producing, using my hands to give meaning to my time now but also to float it forward and anchor someone to history.
Posted by Robin Thomas at Tuesday, February 24, 2009
Email ThisBlogThis!Share to TwitterShare to FacebookShare to Pinterest