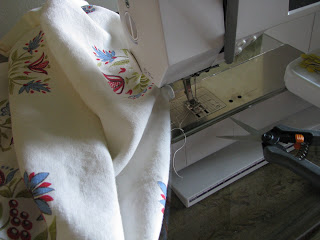 Light filtering in, hum of the machine, two pieces of fabric becoming one...it all is such a mediation. Feet and hands, eyes, concentration, busy efforts which allows peace to descend across the mind's three ring circus, twelve rings? Twenty rings?
I am always thinking about our nascent ancestors and how they had to live. I think about how slow their lives were in comparison to ours. Our lives greatly outpace our ability to adapt genetically. For example the incidence of diabetes is extremely high in the native American population. I was taught that they were nomadic surviving on few meals a week, boluses of meat, sustained on grain, vegetation. The recent influx of sugars into the diet came rapidly and the insulin resistance is very high, therefore diabetes runs amok. Caucasian tribes such as mine, the Scots and Irish, had exposure to sugar less recently and therefore have better adapted to modern diets. Ergo the case of lactose tolerance. People from diary lands are better adapted to tolerate the sugar lactose found in milks simply due to exposure. The genes and body adapt over time.
Because I am from Oklahoma with a rich Indian history, even if it is due to an ugly past and expulsion of Indians from the native homes as a result of politics and lies, I am very near to the idea of humans coming so recently from the woods, the prairie and grasslands. Even though we live in fast-twitch, multi-task, have-it-all time, why am I constantly over stimulated to the point of irritation? I think it is because just 100 years ago, or less if a woman made dinner for her family, it started with building a fire. That started with gathering wood, which could not have been easy to do on the Oklahoma prairie let me tell you. I think they burned cow patties, but that is beside the point. So if you want to make dinner, or have to make dinner, you have to build a fire. Bread needs grain, so you either had to make your own grain from your own fields, trade something you had for grain or actually manage to get to town by foot or horse and buy a sack of flour or corn meal. Where does the yeast come from? You have to keep your yeasts growing from batch to batch. Make the dough, kneed the dough, let it rise, put it in the pan, bake it but don't burn it. Butter? Why churn your own. Can you keep the milk refrigerated? Where do you keep your cow? Dear God, it is not easy. And that is just bread and butter. Each act a mediation.

So I think about what it took to have food and clothes. A woman spent a lot of time preparing, repairing, dealing and hauling. When I do similar tasks of repetition, I find great calm in it. Busy hands equate to a quiet mind. My brain, our human brains, are capable of multi-modal input, our bodies able to produce results rapidly, but the repetitive, mundane tasks are nearer to our adaptation.

And so, sew...sew...sew. It is a mediation. I am so lucky to have my expensive fancy machine with all that new fangled electricity to run it. But still the task of making something with fabric by my hands births something akin to slightly earlier generations and much older generations. That connection is vital to me.
Methodical work. Tasks and time. That is what our brains are currently best built for, I believe. Connecting scraps of fabric connects me to eons of humans before. That defines a mediation doesn't it? 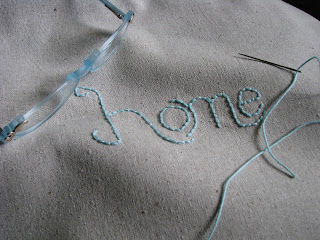 Posted by Robin Thomas at Tuesday, March 24, 2009
Email ThisBlogThis!Share to TwitterShare to FacebookShare to Pinterest