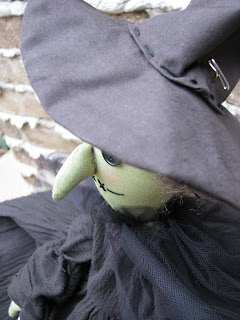 What a witch. I designed this doll a few years ago for a Wizard of Oz school auction. Lord, she is so hard to make and so time consuming. She is, however, quite beloved by myself and others. I have a lot of time to think about her whilst sewing, painting, stitching and such. Prior to paint, she is so naked and unintimidating, like a wet dog. 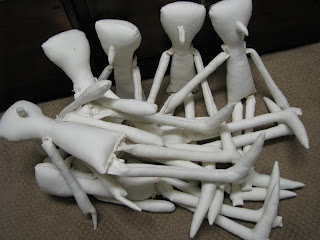 Gotta get that green right. So key to her intrigue... 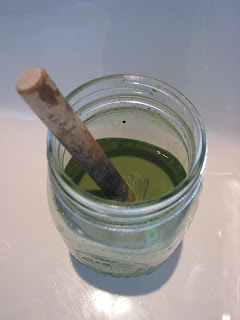 It could not be easy being green. Glenda was caucasion. And we don't really know about the decreased sister as she had striped leggings on, and those shoes of course. I mean she had good taste in footwear, but can we assign a race to that? Admiration, sure, race, no. 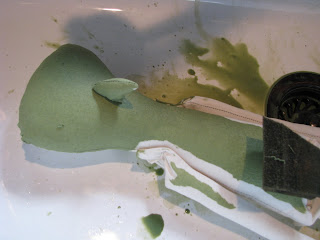 I never had home economics or learned to sew really. I can't read patterns and have no idea how to make a hat. However, I can channel the wicked enough to create a pointy witchy hat. 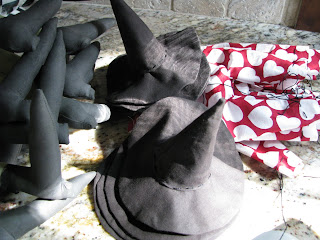 There to the right of the hats you see a red and white heart fabric. Those are her bloomers. I like to think the witch had a little some-something under her skirts... 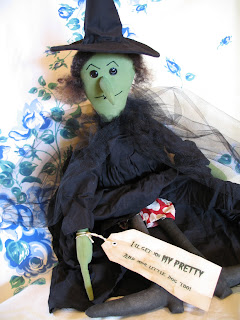 What is it about the wicked witch? I mean, I like Dorothy. But that witch was fascinating. She was powerful. In fact, the most powerful woman in the land. She had her minions, and who doesn't want minions? Can't we forgive her wretched personality? She had that perfect sister, an impossible act to follow. And we cannot forget she is grieving over her sister's death which is, at best, manslaughter. A case certainly could be made for murder since there was a clear robbery associated with the event. Even though those shoes were to die for, were they worth killing for? 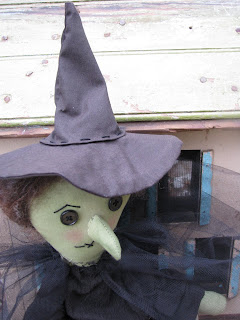 The Wicked Witch was surely menopausal. So moody and bitter. She had a little osteoporosis and was working on a dowager's hump. I mean, really, her bones just disintegrated. While she was dressed a bit on the warm side, she did have a bitter resentment to that pretty, fresh, young Dorothy, a thief and alleged murderer. Was the witch leaping to judgement or did she have a real cause for revenge? 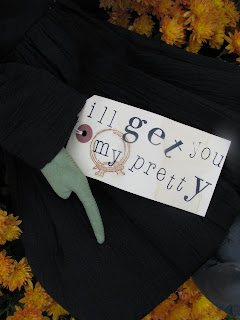 All very interesting. We love a wicked woman don't we? She embodies who I truly am while trying to project something a little more Auntie Em, right? 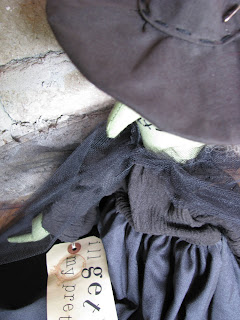 Embrace the inner witch, girls, embrace her... who else will? 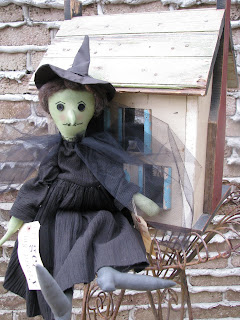