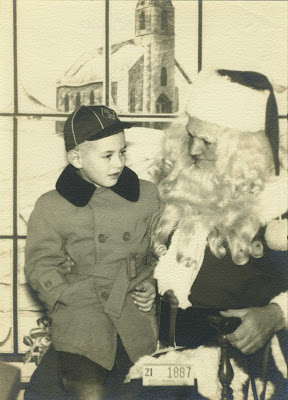 That beautiful Scout is my oldest brother. He would go on to grow up and do all the things the kids did in the 50s. He would finish high school. Get drafted. Go to Vietnam. He would return and head off to school, his military haircut drawing war protesters to spit on him on an American college campus. He would struggle through the next 10 or so years of his life until he couldn't any more.

This year the holidays have been quite blue here. Earlier, I was so sick with the flu I had to cancel what may very well be my mother's last Thanksgiving. While slowly recovering I pushed through caring for my mother and tryed to put together a great birthday party for my daughter. The only Christmas decorating I could manage was the tree. Not even a wreath. I kind of cared but not really.

Friday a week ago my mother had declined so that we took her to the hospital via the emergency department. A blur of highs and lows followed. After a weight loss of over 25 pounds this year, we finally got a diagnosis, a stack of prescriptions and she was kicked out on Christmas Eve in a blizzard. My daughter did not make it home from her grandparents until 8 pm on Christmas Day. The few gifts we had this year remain under the tree this morning, wrapped.

There was a Christmas with wrapped presents under the tree on the 26th many years ago when I was my own daughter's adolescent age. We waited for my brother to come home. We had not heard from him. A call from the coroner's office told the story that he had been in the morgue for ten days. Unclaimed bodies are targeted for disposal at day 10, but our wonderful coroner looked at my brother and said "this boy has a family." He took it upon himself to call to ensure we had been notified. Of course we hadn't. We had been waiting for him. An Oklahoma City police officer, at the end of his shift 10 days prior, marked that he had come to our house and notified us. He simply did not. The apology which came a couple of weeks later didn't help much.

So here I am with gifts under the tree. Of course we are all alive this year. I know to be grateful about that. But actually I feel empty, hollow. My mother lives with me now. I have much to do physically and emotionally in the coming months. Right now I am not sure how I will muster the strength for it all. But I have done it before. We all have. Somehow you keep waking up, plowing forward, through the pudding that is exhaustion. Somehow another meal. Another load of laundry. A trip to the grocery store all the while screaming inside "I can't, I don't want to" and yet doing it anyway.

I can't tell this story out loud. I also can't post a pretty picture of the holiday. This is the blue truth today.
Posted by Robin Thomas at Saturday, December 26, 2009
Email ThisBlogThis!Share to TwitterShare to FacebookShare to Pinterest
Labels: blues, christmas, depression, holiday