Oh One Oh One One Oh 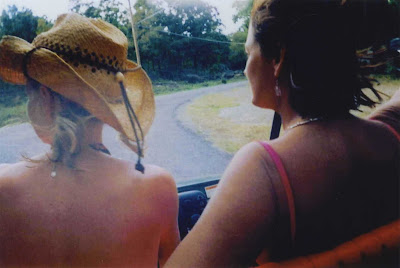 Did you wake up reflective this morning? It is a new year and a new decade. I have been looking back and forward which is really my constant state anyway. The present moment is always my most elusive one. However on this bright morning, introspection seems appropriate.

New Year's Eve ten years ago at the edge of the millennium, we chose to spend it with my dear friend, my chosen sister and her family. My new husband and my newly turned 6 year old drove 4 hours to a small town to my girl's house. She and her husband had set up their simple quiet lives in a beautiful small town, tucked in the pine, near the freshest bluest lake in the state. They had two boys and a life I admired, but knew wasn't quite for me. It was always such a respite to visit them and live their Christ, neighbors and family sort of life.

While we were there I smelled marijuana. Her husband was sneaking outside and smoking pot. Listen, in the old days they allowed smoking in concert venues and they weren't just smoking Virgina Slims Menthol Lights, right? I have seen Kiss, Queen and Boston. Tom Petty, Flock of Seagulls and the Grateful Dead for God's sake. I knew the smell of some Maui Wowie, okay? I was so shocked that with our little kids right there he would be doing this. I never told my friend. How could she not know?

Anyway we left the next day as I have zero desire to spend anytime in the presence of drugs, I mean, I have a medical license I would like to maintain and a small child I would like to keep. Later my girl would reveal to me more shocking details in the same vein as my discovery. I will only say that this guy was not a good guy. He was a decidedly bad husband and father and a slovenly man. I have never known of a worse husband. I will not tell you the things he did, the list of the things he hasn't done is shorter and includes murder, armed robbery and child molestation. So there's that right?

But what ensued over the rest of last decade was me hearing these terrible discoveries she was making, and me saying she has to leave him. Leave him, divorce the bastard. Leave. Get out. But she so loved him and had a deep commitment to her marriage. She believed she had to forgive him and stay with him to keep him alive. She made a vow to God when she married him to stay with him forever.

Uhhhh, expletives here. That was so hard to swallow. So hard for me to understand. So about 4 years into their cycle of discovering something bad, confront, fight, and forgive, I started to realize how codependent I was on her marriage and problems. I was so angry. First I was mad at him. Then I was mad at her. I anguished over it. I started to realize one morning while working in the garden that this friendship with her was supposed to teach me some very important things about loving someone. And, oh lord, the big frontier...about forgiveness.

Yuck. I do not heart forgiveness.

I realized I would have to forgive this lousy husband of hers. I realized she would never leave him. If I wanted a relationship for a lifetime with her, pause...wanting a lifetime relationship was not even on my radar screen. She is my family, I would never forsake her. Never. So I must let go and forgive him. I realized how little I had forgiven myself. Oh shit, oh dear. It was on, dog. I had to forgive myself.

That divine moment started a many year journey for me into the murky world of forgiveness. I had done so much therapy and unearthed all the ugly things before. But I had not ever reached the depth that I needed to really let go of the dark parts of myself. The prayer "forgive me" is not enough for me. My learning curve has a very low rise with a long arch. Nearly flat.

So for about 4 years in the last decade I walked and thought. Asked and prayed. Wrote and drew. Meditated and read. No forgiveness was coming. I was able to let go of a lot of anger about my friend's husband. That was my playground for forgiveness. But my own forgiveness was really about shame. Oh ugly, dark, deathly shame.

It was not until I had the darkest most necessary depression of my life almost 2 years ago that I started to let shame go. The great majority of it burned up pretty quickly once the right crucible occurred. A necessary depression. A winter. A seed. An egg. The shell cracked, then broke and someone emerged that is carrying so much less guilt and shame. Oh, I highly recommend a depression like that for you. I just let myself be there. Waller a bit in the sadness and not feel ashamed for the depression.

I will say it. I no longer feel ashamed for feeling depressed. That was the key to a very strong lock.

So it also healed the anger I felt for my friend. It took about a year and a half for me to break the codependence, mostly break, I still need to have a little I guess. But we as friends, broke a bit. I don't know if she knew how messed up I was over our friendship but we went through some bad days together. Interestingly she was leaving her husband. He had actually spiraled so far down she realized there wasn't even a spiritual grappling hook big enough to salvage that shit. 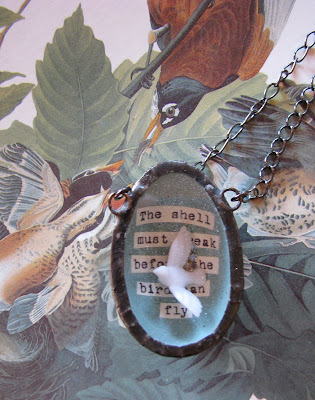 Jewelry piece by Ingrid Dijkers which reads 'the shell must break before the bird can fly'.

I actually felt sad a little about it. After wanting it so bad for her, it was not ultimately the outcome I wanted. I had hoped that man would get better, be better and give her the life with him she never had. Give the boys a fine example of who to be instead of an excellent example of who not to be. But it wasn't going to happen.

What a great lesson that decade provided to me in the form of a relationship with this beloved woman.

I love you shiny girl. Oh one, oh love.

Now find a great life for yourself this decade. Heal. Please know that your marriage and your struggles helped hurt, scar, teach and feed me.
Posted by Robin Thomas at Friday, January 01, 2010
Email ThisBlogThis!Share to TwitterShare to FacebookShare to Pinterest
Labels: divorce, friendship, guilt, reflection, shame