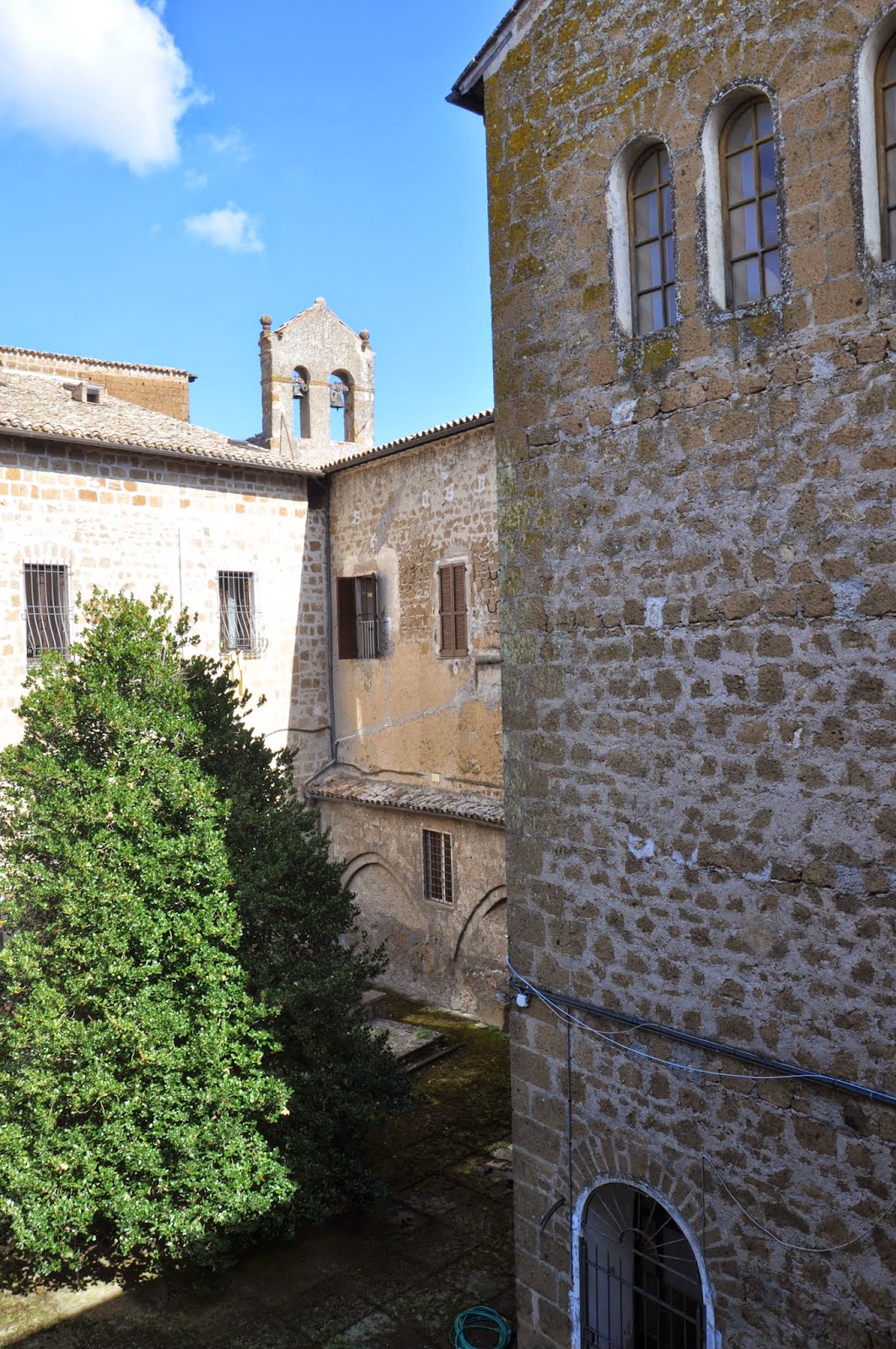 The intense immersion into Italy that was Day Four cannot be made concise.
I shall try... 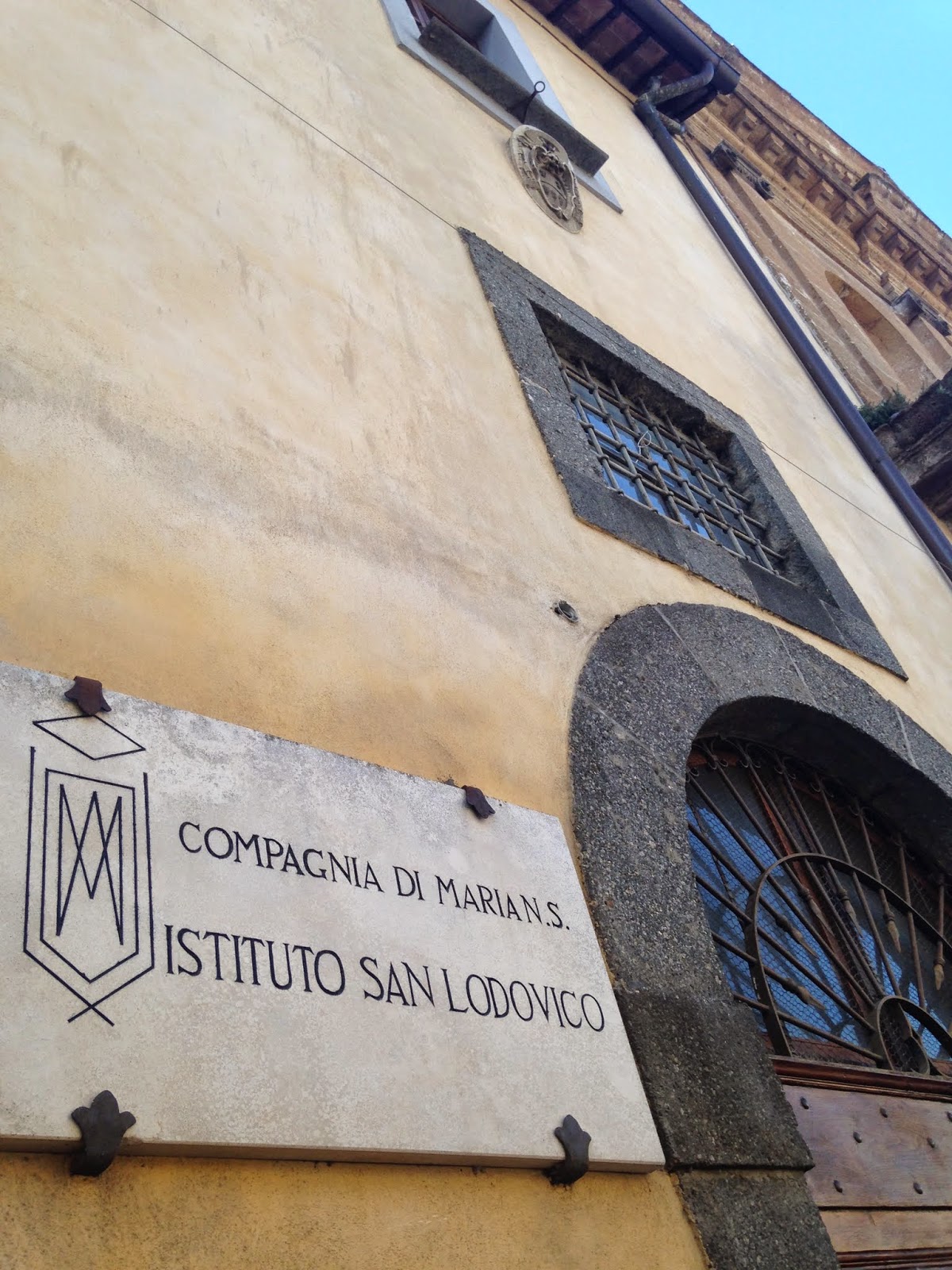 We awaken in the Convent bed and breakfast, the Insituto San Ludovico.
Built as a palace in the Middle Ages, it still bears frescoes of that time all with the loving image of Mary and the Christ. 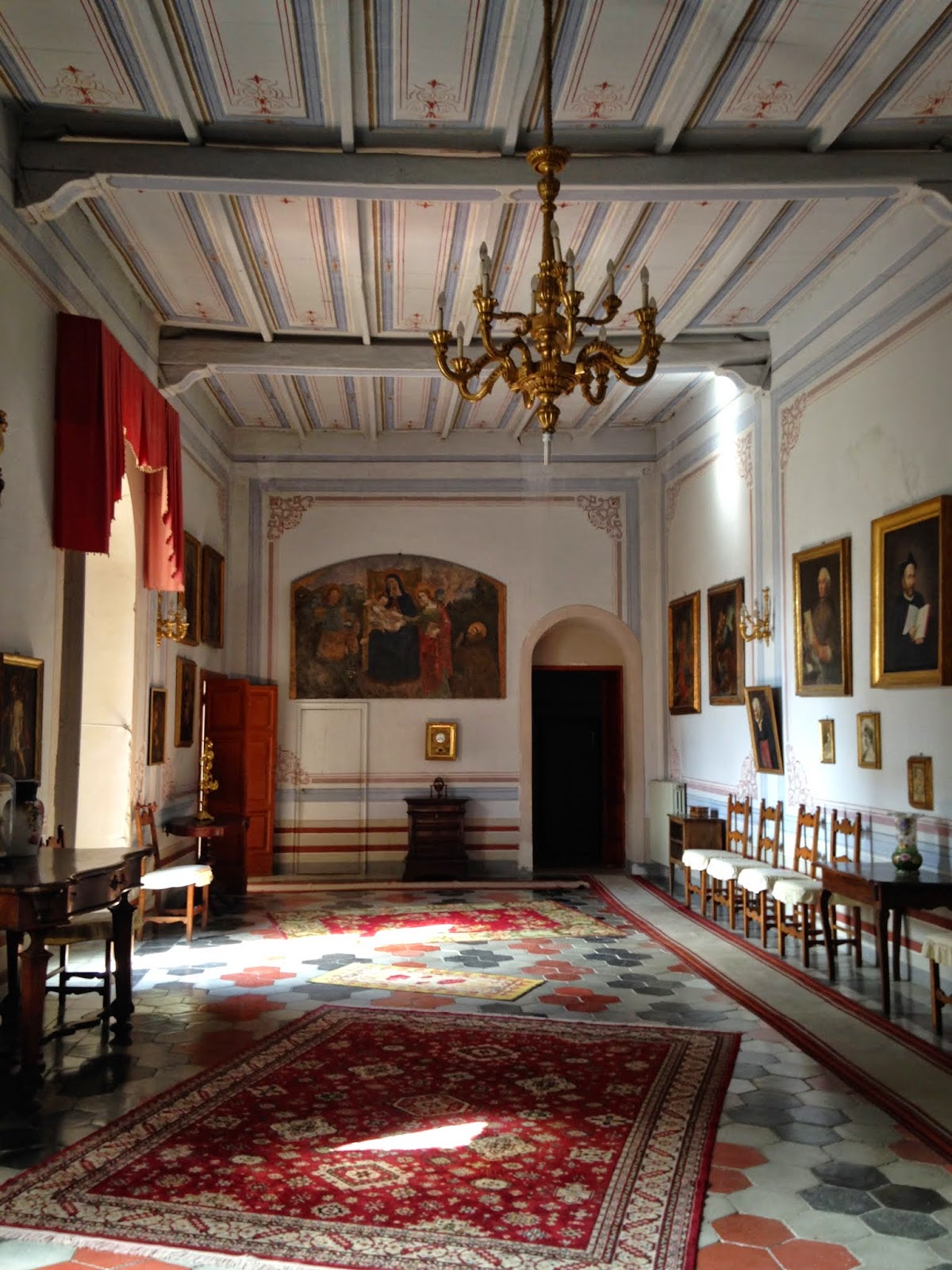 It has lived life as a school and convent and now is a B&B run by two nuns,
although one is down with a broken leg. 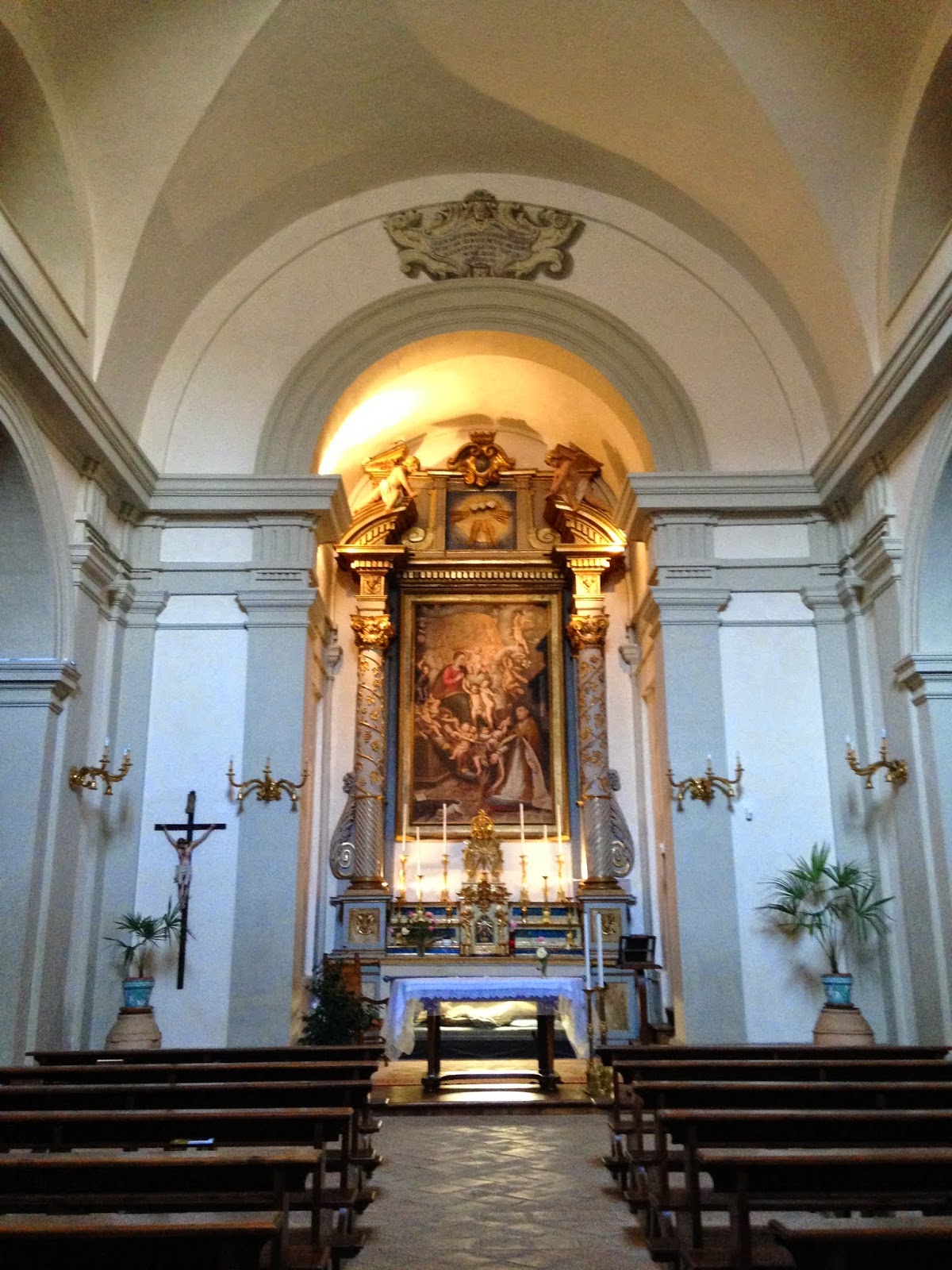 Poor over-worked Sister Giovanna was at times a surly mother pointing out the curfew, at other times beckoning me with a hand to show me a treasure within the walls of her home.
The convent also functions as a pre-school. Children wearing little tunics with Peter Pan collars could be heard laughing and calling out their sing-song Italian through open windows.

Our first day in the studio with Pam and Amy. We started to assemble signatures for our book, the main project for the week.
Also began to know the other students, and we were most fortunate with the assemblage of personalities and strengths, all with something to offer. 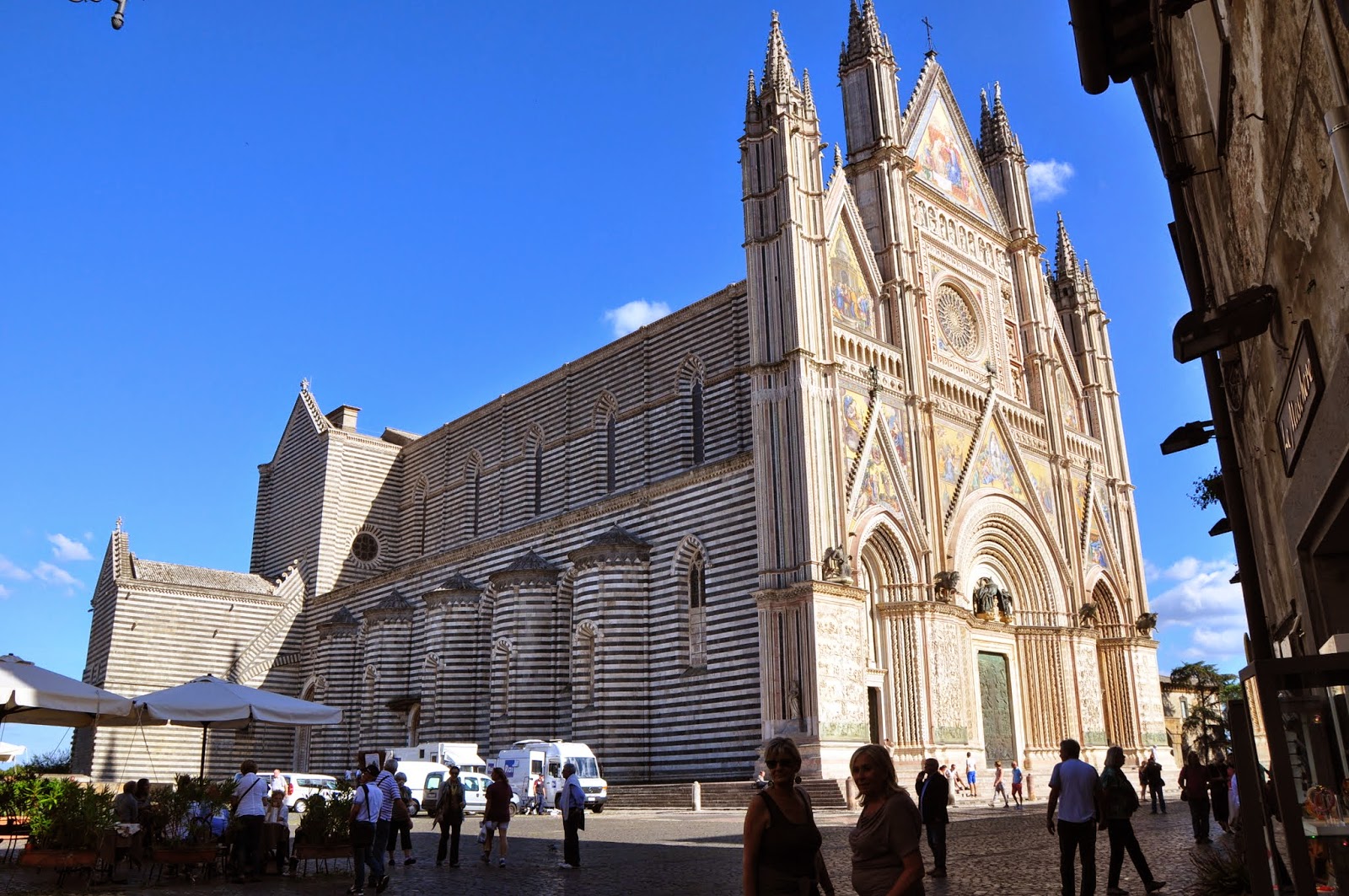 After lunch in the convent dining hall we were off to a tour of the Duomo. 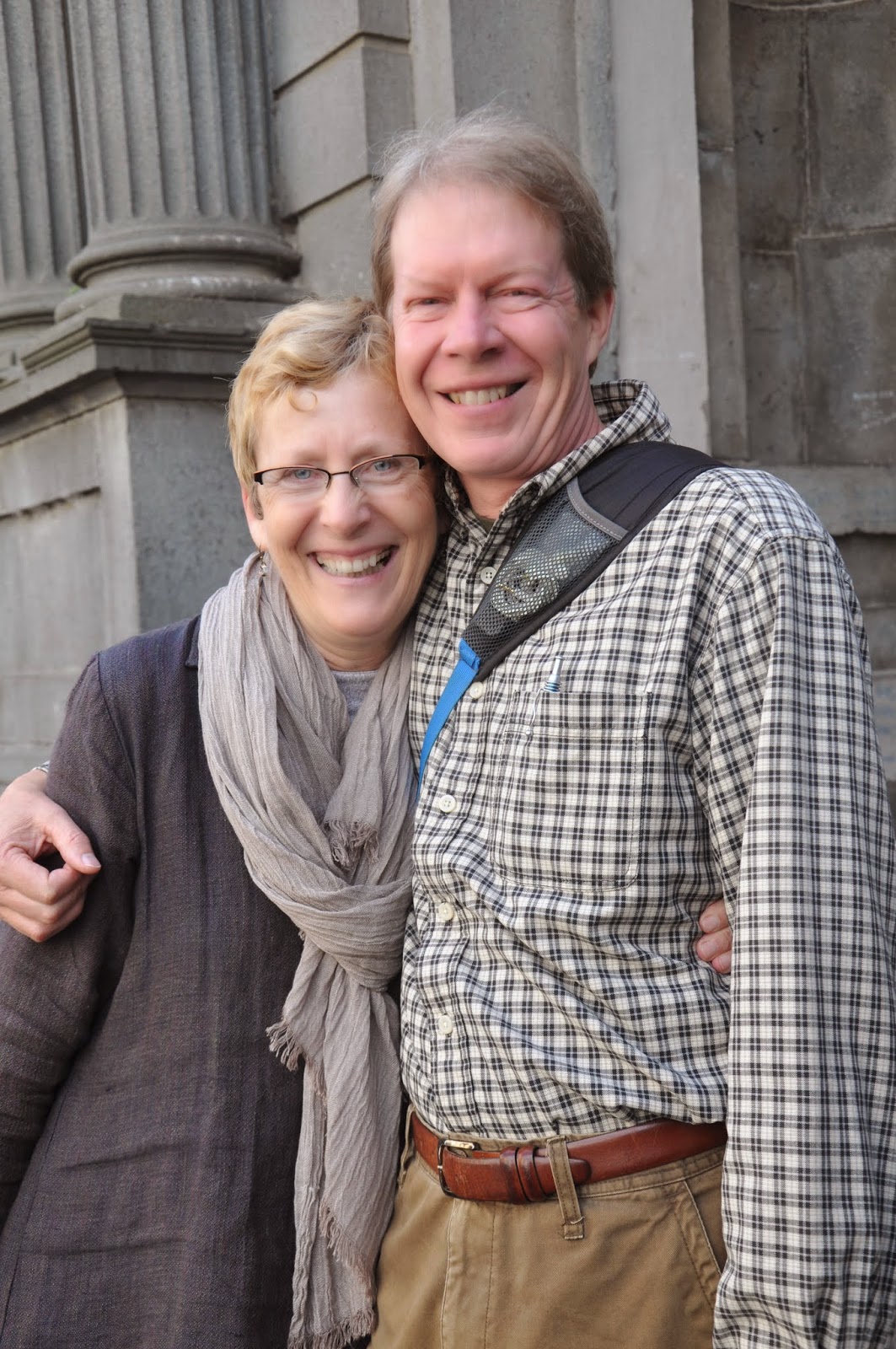 Our tour guide was Kristi Steiner of our Adventures in Italy hosts. It was the highlight of my week in Orvieto as Kristi's love and reverence for the Cathedral was as deep as her knowledge.
http://youtu.be/5YsgRhQDGVg
It is all based on an event deemed as a miracle by the Pope when a Father broke open the host which then bled onto the altar cloth. The Pope commissioned the erection of a Duomo to house and glorify the Miracle of Bolsena. The building was begun in 1290, it took 300 years to complete. The plans on parchment still exist and are the oldest plans remaining today in Italy. 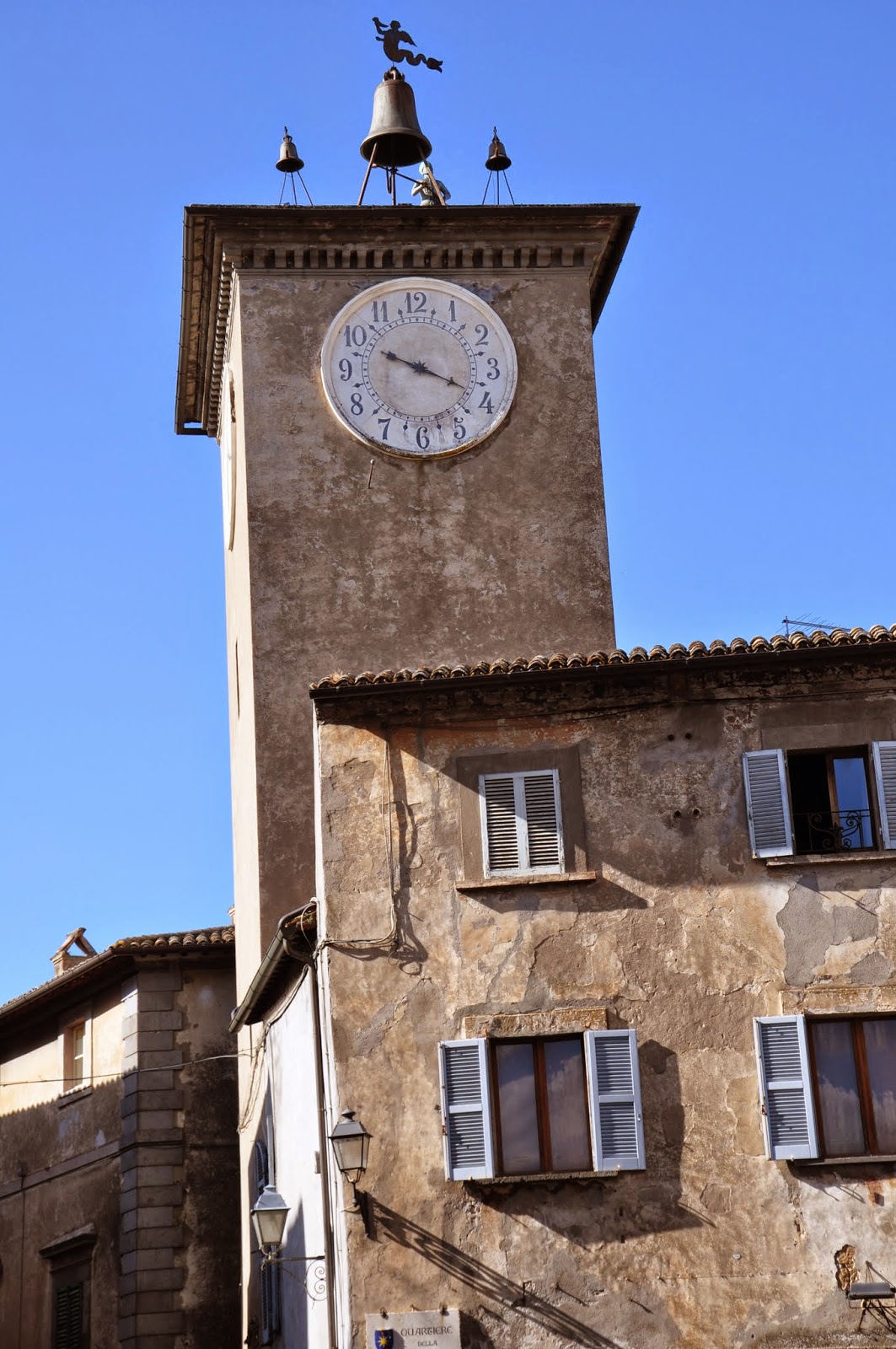 This nearby clock would ring the beginning of the work day, its bells still heard today. 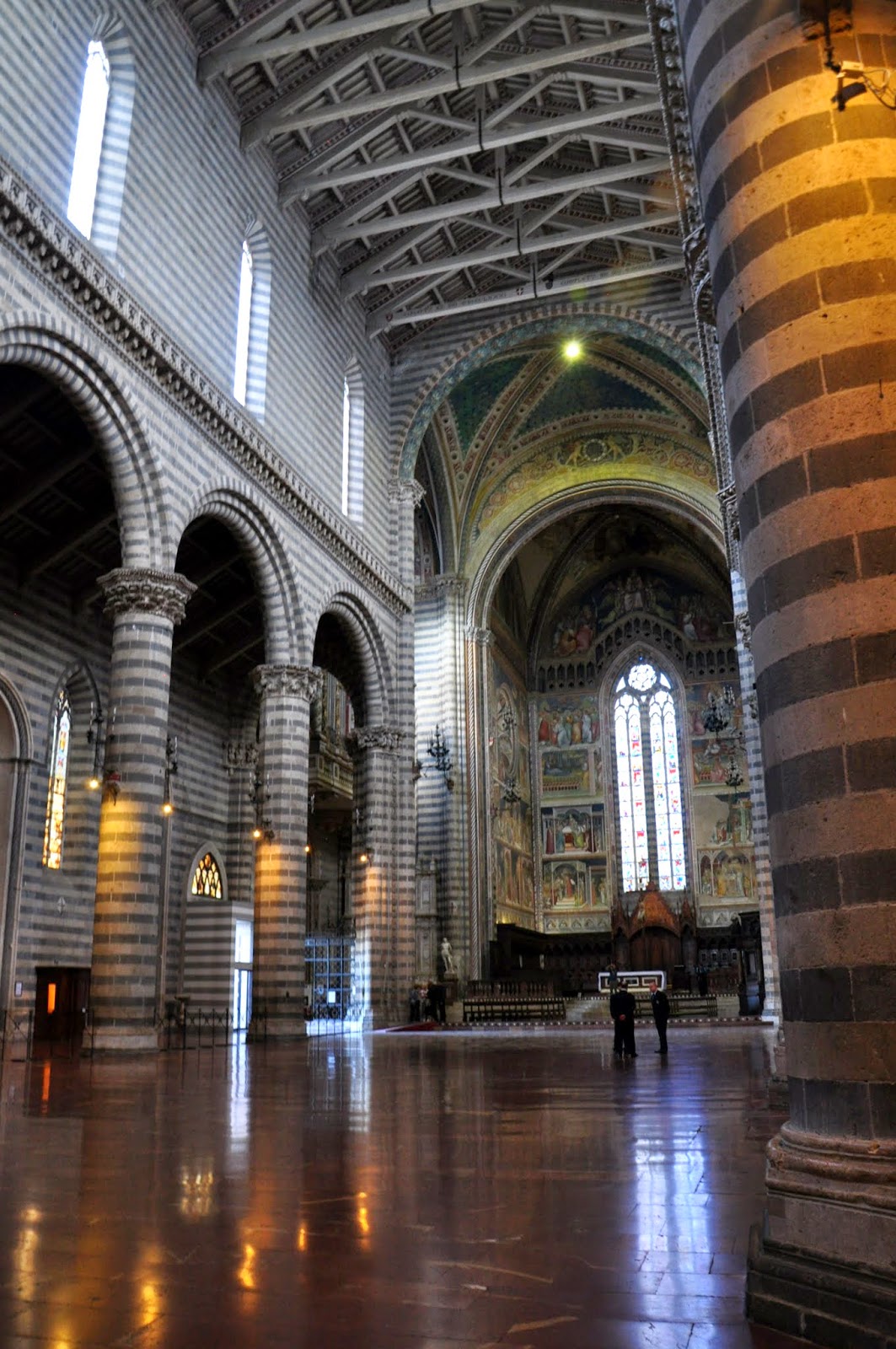 Although photography of the interior of most cathedrals is prohibited,
I took this picture before I realized. 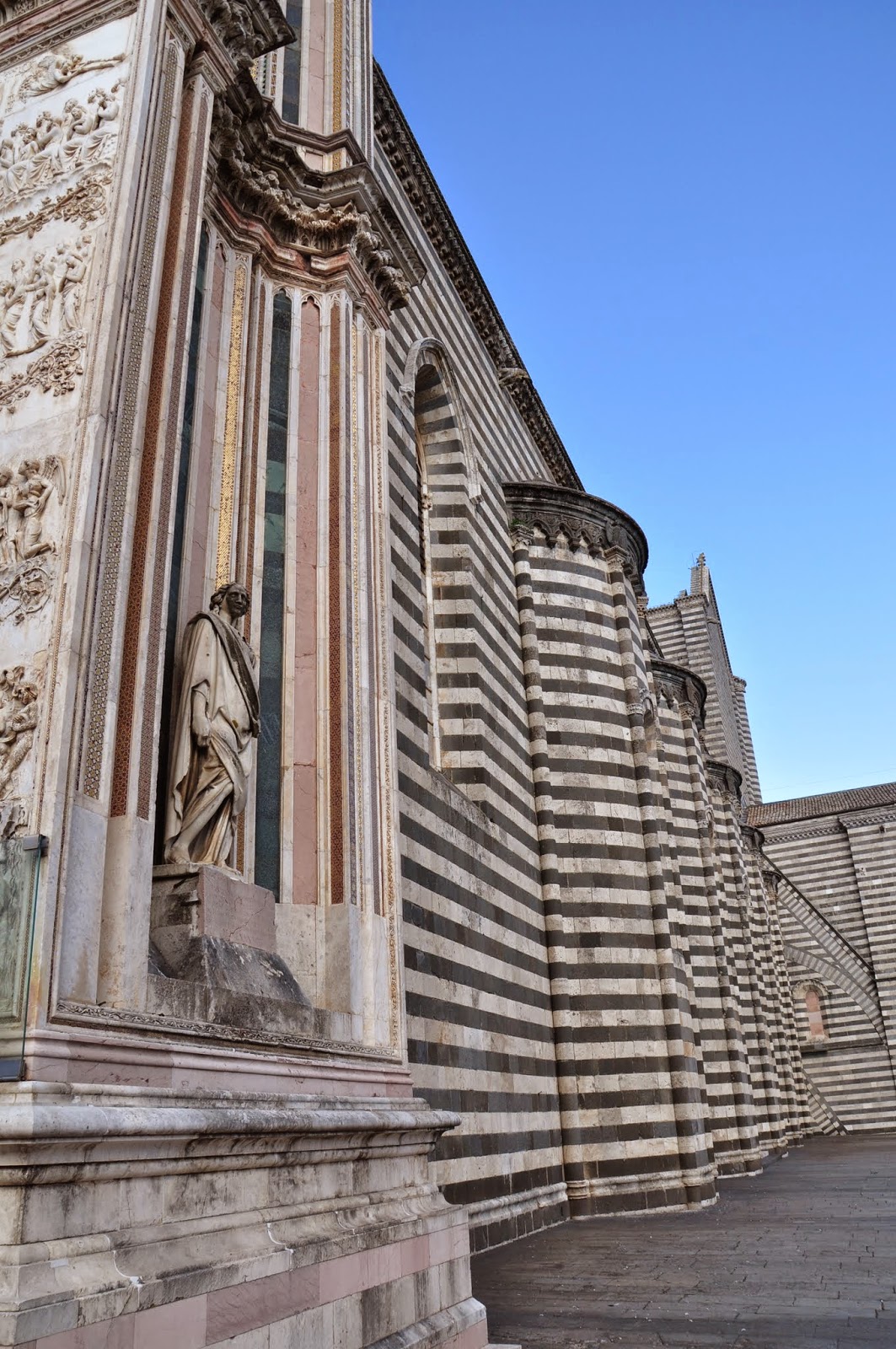 The Bloody altar cloth reliquary is housed in the Capella del Corporale to the left of the altar.
For me the highlight of the Duomo is the the Capella Nuova. The ceiling is the masterpiece of Luca Signorelli, the Last Judgment, 1499-1504. It is rich with suffering and hope and inspired Michelangelo as he took on the work of the Sistine Chapel in Rome. 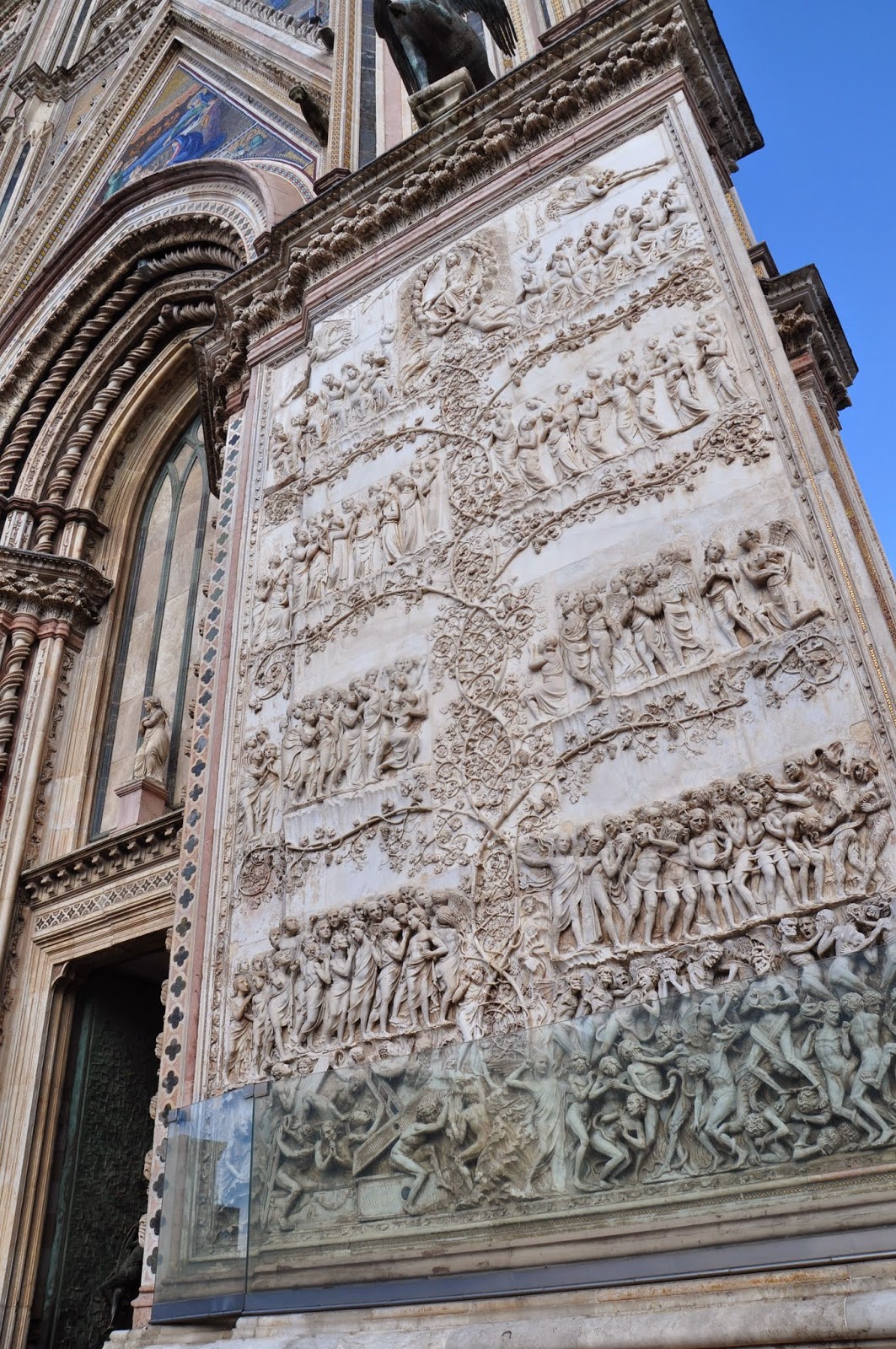 Bas Reliefs on the exterior tell the history of the Bible to the pilgrims who could not read and had no access to the bible itself, a change that has only come less than 200 years ago... 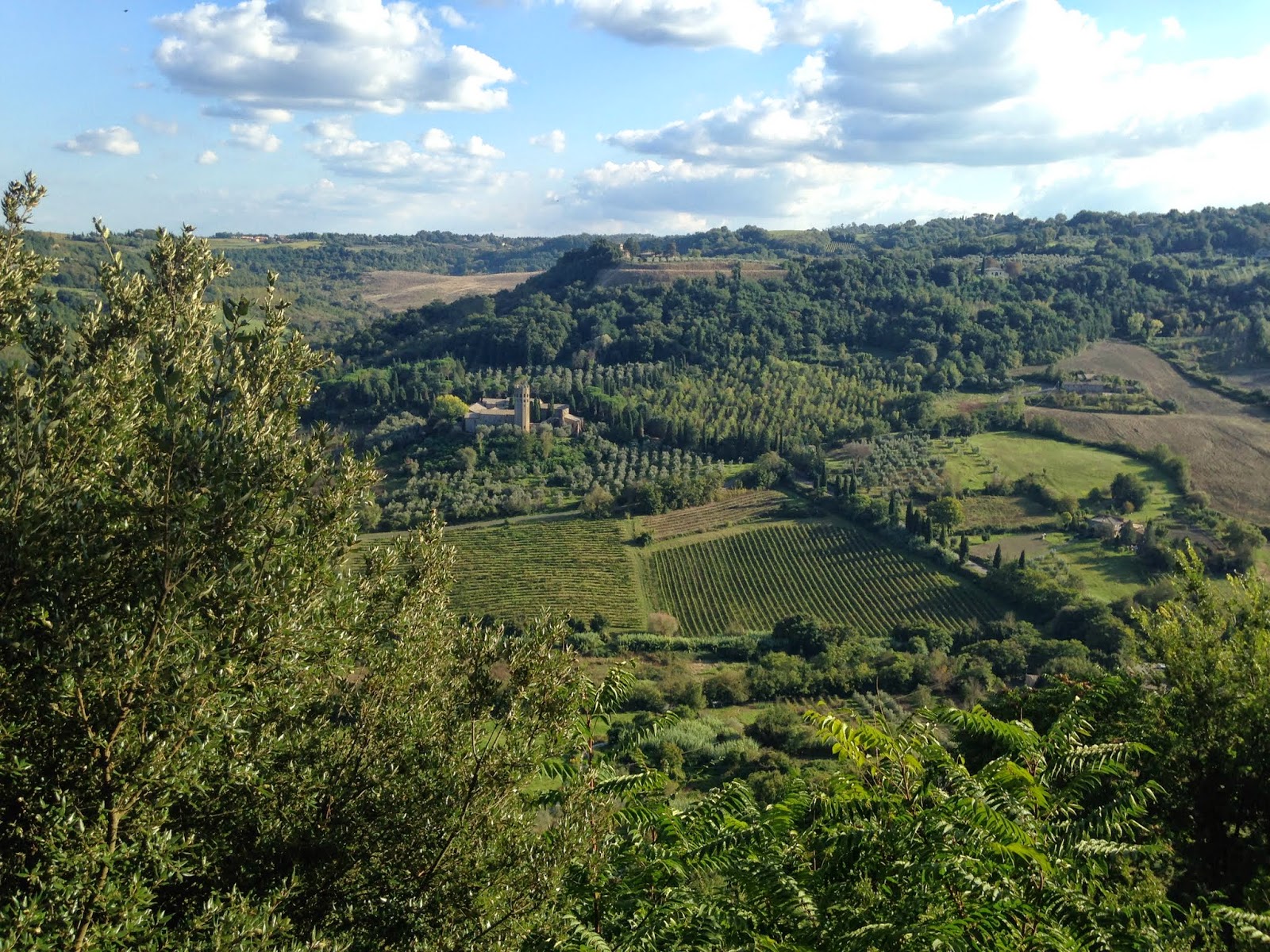 Following the tour, Alisa and I walked to the edge of the city. Orvieto sits on a rocky plateau in the Umbrian countryside, surrounded by vineyards and olive tree groves.
We took in this vista from the East end of the 'Rock.'
That evening was a wine tastings and parings education at Bartolomei L'olio. I learned more in the first 5 minutes about wine than I had in all prior wine tastings combined. I also found white wine preferable to red, which I never before had.
You can find Orvieto Classico in the US
and I know for a fact Alisa has already opened a bottle Stateside...
to be continued...